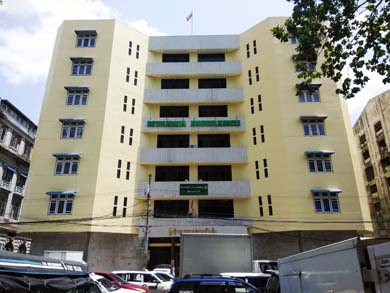 In Myanmar, the Insurance business started in 1826. After the first Anglo-Myanmar War, the Europeans started to do their businesses in Myanmar and foreign Insurance Companies began to operate in Myanmar in order to provide insurance covers for those businesses.

When the World War II broke out, the insurance operations had to stop. The second interim Government which authorized to rule on 4th June, 1942 prescribed for Burma War Risks (Life, Personal Accidents and properties) Insurance Rules on the 1st January, 1943. The Burma (Government Security) Insurance Company Ltd started to operate again in 1947.

In 1948, the national insurance companies such as People’s Insurance Co., Ltd and the Burma Fire & General Insurance Company Ltd started to operate.

In 1950, the Government involved in the insurance businesses by enacting Union of Insurance Board Law.

After Burma National Insurance had been nationalized in accordance with the Insurance Company Nationalization Act, Union of Insurance Board was founded on the 1st March, 1952.

From the 1st July 1957, it directly underwrote the general insurance. On 1st January, 1959, Life Assurance (Prohibition) Act was enacted and other insurance companies except Government (U/B) were prohibited from underwriting life assurance.

It is proclaimed that the only Union of Insurance Board had to underwrite General Insurance.

In established People’s Bank of the Union of Burma (PBUB) as the sole Bank after merging the banks in November 1969, the Union of Insurance Board was incorporated as an insurance department.

Myanma Insurance has its vision on that is necessary for eradicating publics’ looses economically and socially due to act of God and act of human beings.

By utilizing insurance in the name of risk management, Myanma Insurance takes its mission enthusiastically to render recoupment of past losses for publics those who suffered from economic and social losses due to act of God and act of human beings.